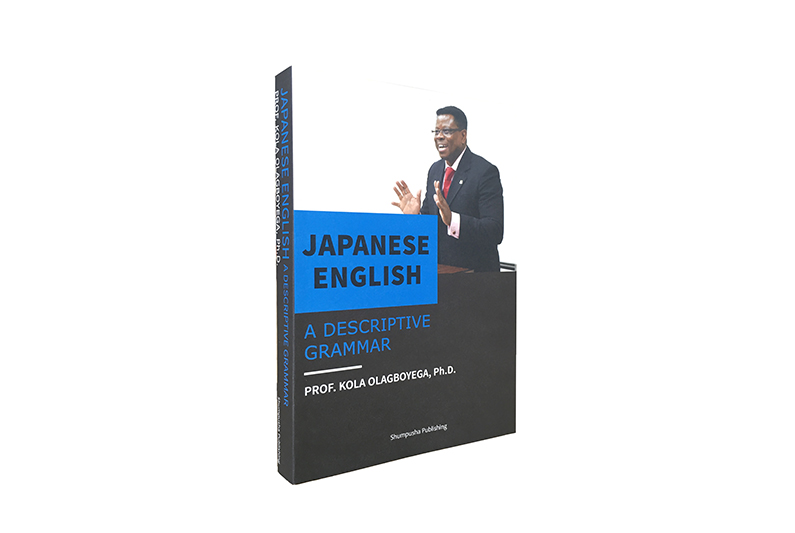 Arguments rejecting the pedagogic notion of “Standard English” or “correctness”, and suggesting that all forms of English are equal, have resulted in the proliferation of terms such as “Indian English”, “Singapore English”, “Filipino English”, “Nigerian English” etc., which are claimed to be on precisely the same equal footing with “American English”, “British English”, “Australian English”. (From Chapter 1 Introduction: English in Japan)
（ISBN 9784861106804）

Professor (Chief) Kolawole Waziri Olagboyega is a British/Nigerian academic who is based in Japan. He is the Professor of English and Applied Linguistics at the Department of English, Faculty of Letters and Graduate School of Tsuru University, Japan. Prior to joining Tsuru University in 2018, he was the Director of the English programs and the Director of the Language Acquisition Center at the International College of Liberal Arts, Yamanashi Gakuin University, Japan. He had taught in the Graduate School at Akita International University in Japan from 2007 to 2014. Prof. Olagboyega has taught a variety of students at both the undergraduate and postgraduate levels in Nigeria, the United Kingdom, Oman, North Cyprus and Japan. He is an alumnus of four universities including, the University of Sheffield (Ph.D. in English and Applied Linguistics), University of Cambridge (M.Phil. in English and Applied Linguistics), University of Greenwich (PGCE in Post-Compulsory Education and Training) and Obafemi Awolowo University, Nigeria where he obtained his B.A.Ed., graduated with a first-class honors degree in English Education and was awarded the student with the best overall performance (CGPA) in the B.A., B.A.Ed., B.Sc., and B.Ed. degree examinations in 1992.
Prof. Olagboyega is an accomplished scholar with four books and numerous scholarly publications. He has published widely in the areas of Applied Linguistics, Language Teaching and World Englishes with many publications in international journals. He is a Fellow of the Cambridge Commonwealth Society. Two of his other books are:
1. Olagboyega, K.W. (2017): English Language: Structure, Varieties, Social Contexts and Learning. (Single-author); March 29, 2017; Yamanashi Gakuin University Press.
2. Olagboyega, K.W. (2013): Communicative Grammar for High School and University Students. (Single-author); January 25, 2013; Akita International University Press.