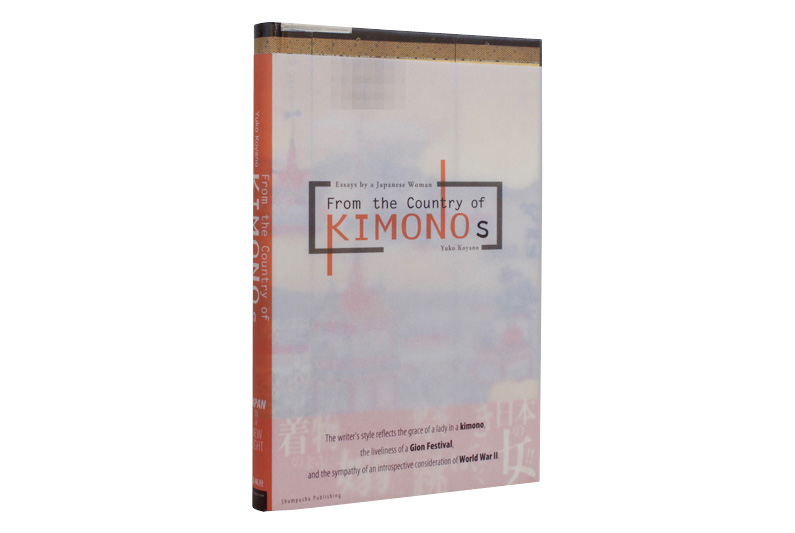 From the Country of Kimonos

B. S. Gordon who wrote the rights of women in the Constitution of Japan and H. Kolein who became a prisoner of the Japanese Army. Chiune Sugihara who issued a visa to the Jews, Japanese culture and war as seen in the eyes of the “world” such as the aesthetics and solidarity that still exists at the Kinkakuji Gion Festival!
（ISBN 4861100917）

AUREATE MEDITATION
The Temple of the Golden Pavilion
One of Japan’s great cultural treasures
THE SOUND OF RECTITUDE
Chiune Sugihara
The Japanese diplomat who during W.W. II signed
transit visas allowing thousands of European Jews
to escape the Nazis
A CENTURY-LONG DESIRE
Beate Sirota Gordon
The American woman who was responsible for writing the article of the new Japanese constitution in 1946 guaranteeing equal rights for women
A TOUCH OF SOLACE
Helen Colijn
A Dutch citizen interned by Japanese forces in
Indonesia at the outbreak of W.W. II
AWAKENING IN JULY
The Gion Matsuri
A diary-like account of witnessing the construction of the giant floats for the Gion Matsuri in Kyoto